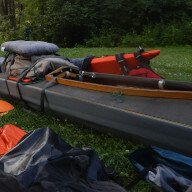 I found this on Saturday.

Unfortunately everything that should have been in the skin package is missing like ribs the seat and the aluminium spread skirt mount and the skin itself.

I am thinking for days how and if I might be able to rebuild ribs and seat to get it on the water again.

Unfortunately it is not one of those GESA eski's I am looking for but the slalom 58 model, and it is also not yet finally mine.

@zem is it a Kolibri?

@tuxflo No a Kolibri would not be worth the effort of rebuilding all its ribs! There are too many of those out there.

It should look like this when it is done:

@tuxflo
GESA was a small folding kayak manufacturer in Vienna which was operative from 1950 until 1968 when the main owner Josef Gerhartl officially retired. There where a few builds Gerhartl did during retirement however.

The number 58 of this boat frame indicates that it was built in 1958, as the year was the numbering scheme for the Slalom model.

It is 4.20m long, 60 cm wide, weights 17 Kg, and has sprayskirt and fixed seat position by default. You can roll it without modification. 😎

@tuxflo The project is getting some first shapes. I managed to secure 2 contacts to collectors helping me in creating a copy of those missing ribs, and probably even the seat and cockpit.

@zem ah cool. I misinterpreted the first toot since I'm no folding boat expert, I just inherited a Kolibri II 😅
Good luck with the GESA though! Maybe we'll see each other on some river sometime 🛶

This is the social network for Conesphere.com's community.